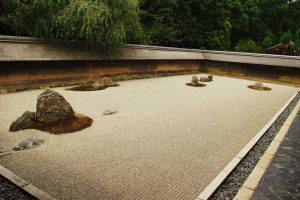 Ku is about allowing oneself to sense surroundings and act without thinking.

It is a core element of what we try to convey in our teaching and manifests in many different contexts.

One is the emptiness that one seeks when disappearing or becoming invisible within a technique.  Another is the ultimate goal of putting oneself and the opponent in a state of ku when engaged, so that the fight will dissipate; if there is nothing but ku to fight, then the fight goes nowhere.  And further, if the practitioner creates a state of ku in an escape, then there is nothing to chase.

The ultimate goal is to feed the fight nothing but emptiness, on a physical and mental level, resulting in no physical conflict whatsoever, and ultimately no need to exert any effort or need to endure.

Ku is the concept of arranging space, rather than the objects, or, if you like, using the objects to arrange the space.

As well as the metaphysical concepts, there are practical ways to use emptiness.

One is in distancing.  Again, the concept of taking control of the space:  the critical distance between oneself and an opponent.

The distancing changes depending on the circumstances.  The opponent’s height and reach, for example.  Whether an opponent has a weapon or not.  What the weapon is.

We always have to control the distance.  To set a correct distance and not allow the attacker to choose a distance for us.

In practice, it is good sometimes to use distancing which feels uncomfortable.  The perfect distance is at the edge of being dangerously close.

There is another point about this critical distance, which may be self-evident for people who train in weapons or in striking martial arts.  It is a concept which has important tactical points about seizing and keeping the initiative.  If one is close enough to strike the opponent, one is close enough to be hit.  That applies in sparring, where a mistake could be painful.  And it applies in the knife, where a mistake could be fatal.

“The enemy who is against the laws of nature will lose his battle before he begins to fight.  The first priority to the ninja is to win without fighting.”