Finish What You Start

It takes a bit of momentum to get up and get on with things, and since this particular year has lacked a certain busy-ness for many of us, the absence of all that to-ing and fro-ing to give us some of that momentum has very likely impacted how much we are (not) getting done.  This lack of impetus from an ‘unbusy’ year has seemed to make it so much more exhausting to do even minor tasks.  I know I am not the only one feeling this. 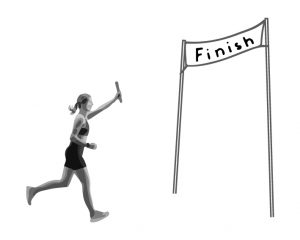 When I was quite a bit younger, we were encouraged to “finish what you start”.  Being one of many children, it wasn’t really a lesson that was monitored as well as it might have been, so it wasn’t until a long time later before I finally made any real attempt to put the concept into practice.  The old habit of starting several projects at once (and seeming never to get anything much completed) had to be overwritten, and it felt as if my brain was physically twisting and sliding around in my skull while new neural pathways were laid down.  It was a slightly odd experience.

Anyway, I got a bit more practice in, and it turns out that I got a lot more done than I otherwise might have without keeping that particular focus.

Mind you, one still has to be mindful that being stubborn until the end may not necessarily be in one’s best interests, and sometimes a decision has to be made to stop something if it is proving to be either harmful or pointless, or both.  Gotta be a little smart about yourself too.

Nevertheless, “finish what you start” got me to shodan.  I hadn’t necessarily believed that I could achieve this, but still thought that achieving a high rank would be pretty cool.  Fortunately for me, my sensei believed I could, and I eventually got there, even with some hiccups on the way.

What also helped the process was a good dollop of “start as you mean to finish”.  Training was always incredibly amazing and interesting to me–I am somewhat fascinated by small details (maybe I am just a little pedantic), so keeping up the pace I set at the beginning was not such a huge challenge.  Even now, there are things to be discovered that keep the training experience fresh, and I think that is true for all of those who still train after many years.

For the many students who have come through our doors, it is part of our brief as instructors to talk to them about how they alone are responsible for their progress, that shodan is possible for all of them, and how long that will likely take.

Using “finish what you start” is just a simple way to say set a goal, follow-through, be disciplined, focused, persistent and consistent until the job is done.  Productivity is guaranteed.

This has got to have great implications elsewhere in one’s life, and it might just be my personal opinion, but at least in the case of learning a martial art, I think it’s pretty easy